So far I’ve been discussing some of the advanced rhythmic concepts found in the work of Dilla and other hip-hop, neo-soul, and jazz musicians. To try some of this stuff out, I decided to make my own lo-fi hop-hop beat.

END_OF_DOCUMENT_TOKEN_TO_BE_REPLACED

In this post I want to take a look at some transcriptions of Dilla feels found in the wild to break down what they’re doing.

The transcription methodology for these tunes was to pick a four bar section where the beat is clearly audible and align it to a beat grid in Ableton. I then recreated the grooves on separate tracks by looking at the waveform to determine where individual hits occurred. When the waveform was unclear, I placed a sample in the approximate location and then adjusted it until it no longer made an audible flam against the track. For some of the songs with sampled drums, I isolated the samples and aligned them via phase cancellation.

This post includes screenshots of the Ableton live sessions and standard notation for each tune. For the standard notation, I focused on creating intuitive and easily digestible summaries of the grooves rather than notate them literally. I experimented with a couple different approaches for notating subdivisions and microtime including written descriptions, approximating to the nearest subdivision, and using special symbols to mark when notes fall behind/ahead of the written beat.

END_OF_DOCUMENT_TOKEN_TO_BE_REPLACED

Swing refers to a type of rhythm where alternating subdivisions are given unequal durations, creating a long-short-long-short pattern. In jazz it’s typical for 8th notes to be swung and rock and hip-hop sometimes feature swung 16th notes. The most common type of swing is a triplet swing in which the first note has twice the length of the second note. It is often notated like this:

END_OF_DOCUMENT_TOKEN_TO_BE_REPLACED

The Dilla feel has its origins in the late 90s with the legendary hip-hop producer J Dilla and the neo-soul/RnB/hip-hop collective The Soulquarians.

END_OF_DOCUMENT_TOKEN_TO_BE_REPLACED

A transcription of the head and shout chorus of Wayne Shorter’s tune “This is for Albert” from the record Caravan by Art Blakey & The Jazz Messengers: 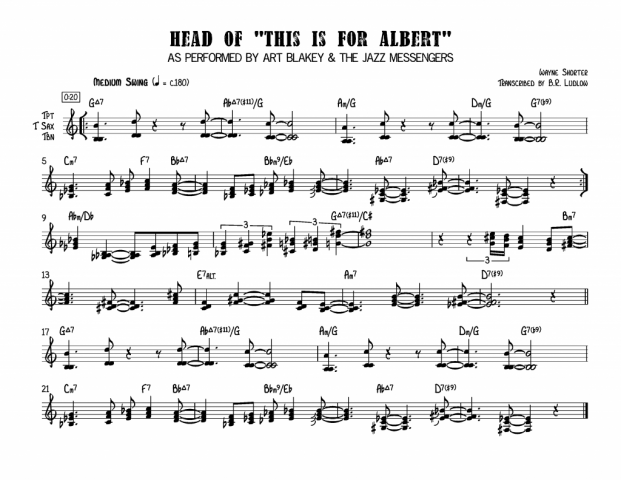 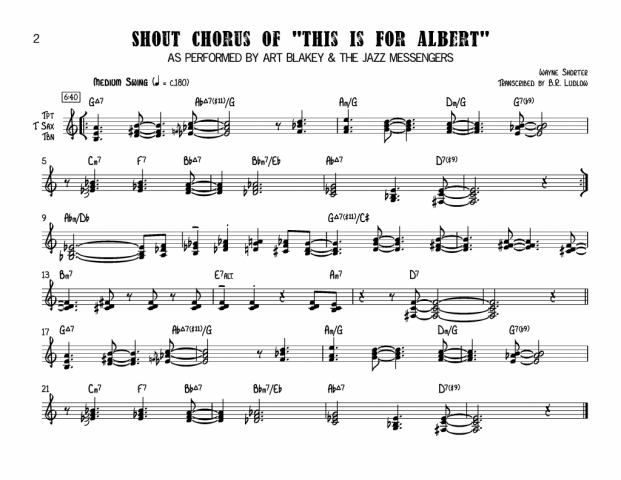 The horn voicing on this tune is great. Really good examples of triadic and spread voicings for jazz sextet. For more information, check out my post Five Ways to Voice Horns For Small Group Jazz.

Some general approaches to voicing for a 2 to 3 horn jazz group, including Unison/Octaves, Fourths, Triads, Spread, and Parallel/Cluster. To create comparable examples, I used an 8 bar section of This Is For Albert by Wayne Shorter (get the original transcription here) and re-orchestrated it using each of the different techniques.

END_OF_DOCUMENT_TOKEN_TO_BE_REPLACED

This is a line from a WIRED video featuring Jacob Collier and Herbie Hancock, but I’ve seen similar ideas espoused in various places. The concept is that for any given pair of bass and melody note, there exists a way to harmonize them. Put another way, there are 12 possible intervals that can exist between a bass and melody note, and each of those intervals fits with at least one chord.

This is a chart of the 12 intervals and all their possible harmonizations that composers can reference when looking to change up their harmony.

END_OF_DOCUMENT_TOKEN_TO_BE_REPLACED

A transcription of Steve Gadd’s drum solo on Samba Song from the 1978 Chick Corea record Friends:

This is a prime example of how note density and orchestration can be used to provide shape in a drum solo. It can be roughly divided into four- and eight-bar sections, the first of which contains very sparse rhythms orchestrated between the snare and cowbell. New pieces of the kit are introduced and explored one by one, starting with the hi-hat, followed by the bass drum, toms, and eventually cymbals.
Each section layers on more rhythmic density and complexity. Mm. 1-17 move from separated notes and figures to long streams on 16th note paradiddle patterns. Mm. 20-24 features a highly syncopated pattern of off-beat 16th note accents. 32nd notes are introduced at m.29 in the form of a hemiola pattern of alternating 16ths and 32nds. This is followed by an unrelenting stream of sextuplets at m.33 (mathematically slower than the 32nd notes, but they are played continuously rather than broken up). Finally, at m.37, there is a rhythmic simplification back to 16th notes to close out the solo.

Note: I notated mm.29-32 with flams instead of 32nd notes to emphasize the swiss army triplet nature of the figure. It sounds like straight 32nd notes when played by Gadd.

Really great minor blues vocabulary here. He had some incredibly hip ways of bending the time within phrases that made it difficult to notate the exact rhythms. Definitely check out the recording to catch the laid-back rubato-esque feel.