Swing refers to a type of rhythm where alternating subdivisions are given unequal durations, creating a long-short-long-short pattern. In jazz it’s typical for 8th notes to be swung and rock and hip-hop sometimes feature swung 16th notes. The most common type of swing is a triplet swing in which the first note has twice the length of the second note. It is often notated like this:

Triplet swing is just one of many possible ways that subdivisions can be swung. The MPC swing system provides a good way to talk about different swing feels. It describes the percentage of the beat that is taken up by the first note. For example, 50% corresponds to perfectly straight time where both notes have an equal duration. 66.6% is a triplet swing where the first note is twice as long as the second. The benefit to this percentage system is that it allows us to easily quantify and discuss any swing ratio without having to relate it to western notational note values which, as we’ll see later, can quickly become cumbersome.

Quintuplet swing subdivides the beat into quintuplets. The first note is three quintuplets long and the second note is two quintuplets. This corresponds to a swing ratio of 3:2 or 60%. It has a more powerful and angular sound than the standard triplet swing.

In septuplet swing , the first note is four septuplets and the second note is three septuplets. This corresponds to a swing ratio of 4:3 or roughly 57%. It has a really hip, lop-sided feel.

You can take advantage of the additional subdivisions available in septuplet swing to do things like kick stutters (double/triplet kicks).

The producer Slynk has a really great video on the topic of septuplet swing, and one the interesting things he points out is that triplet melodies sound really good over septuplet grooves. He also creates a cool flam effect by placing a kick one 32nd note after the straight 8th subdivision, which falls just slightly behind the septuplet subdivision that the hi-hat is playing. This is a transcription of the final groove that he makes in the video, with a triplet rhythm on top of it:

I had never thought about this as a swing ratio until I saw it in a Kendrick Lamar tune (which will be transcribed in the next post). The golden ratio as a swing percentage would be roughly 61.8%, falling in between triplet and quintuplet swing. It manages to capture the nice rolling feel of a triplet swing but with a little more of the power and angularity of quintuplet swing. The simplest musical approximation of golden ratio swing is to shift the second note back by one 32nd note, which gives a swing percentage of 62.5%.

A slightly closer approximation is 62%, however this one is very unwieldy to notate literally.

The difference between the two is only barely noticeable, even at this slow tempo.

This diagram illustrates how these different subdivisions relate to each other. 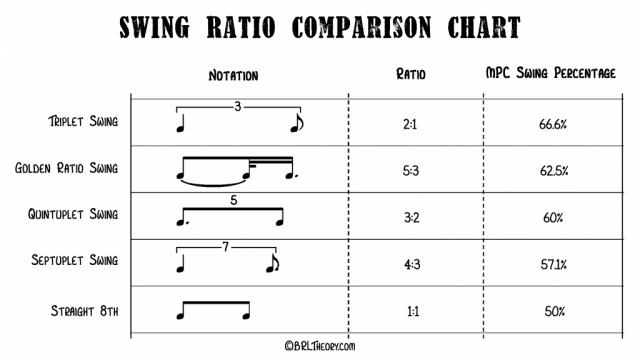 In the real world, most Dilla-feel groves don’t fit neatly into one subdivision. Some use multiple subdivisions simultaneously, as in the Slynk septuplet example above where the hi-hat is playing a septuplet swing, the kick is hitting on 32nd notes, and the synth is playing triplets. This creates a unique type of polyrhythm that I call “polysubdivision”. It has a rolling, moiré pattern-esque type feel where everything lines up on the beat, but within a beat the elements flam and rub against each other to make an indeterminately subdivided wash of rhythm.

Many others don’t use any particular subdivision, instead placing notes between subdivisions or slightly ahead of/behind the beat, changing the placement throughout a measure, and/or offsetting unison notes very slightly to create subtle flam effects. This style is commonly called “unquantized” or “off-the-grid”.

Below a certain level of subdivision, these rhythmic variations become too small to easily hear, but are still felt in their aggregate effect. This is called microtime, and it is a large part of what people mean when they talk about “feel” and groove. It’s a quality that’s difficult to discuss because there is no common,  effective way to represent it in western standard notation. In theory, you could notate this microtime by using incredibly small subdivisions or though complicated tuplets, but in practice this just makes for very confusing looking music that provides little intuition about how a groove should sound or feel (see the 62% golden ratio swing approximation above). I’ll discuss this further in the next post, where we’ll be breaking down some real-world examples of unquantized grooves and looking at a few different approaches to notating microtime.