Some general approaches to voicing for a 2 to 3 horn jazz group, including Unison/Octaves, Fourths, Triads, Spread, and Parallel/Cluster. To create comparable examples, I used an 8 bar section of This Is For Albert by Wayne Shorter (get the original transcription here) and re-orchestrated it using each of the different techniques.

Horns are voiced in unison or octaves. This is the plainest way to voice multiple horns. Interest can be added by switching between unison and octaves to emphasize different parts. 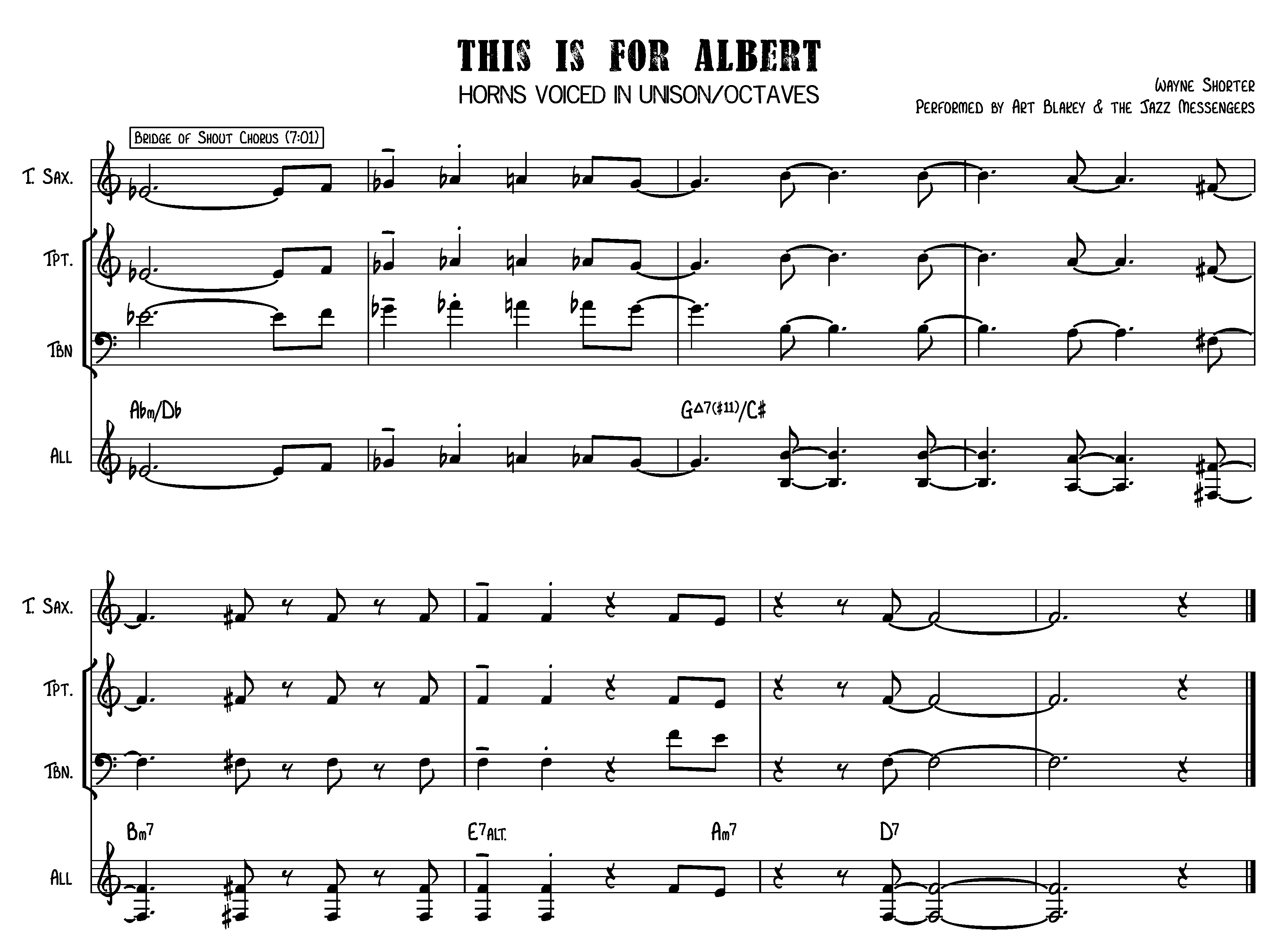 Horns are voiced a perfect 4th apart. This creates a modern, edgy, slightly dissonant sound. Works well in minor and modal tunes. This is similar to the parallel/cluster voicing discussed below, but specifically using the interval of a perfect 4th. 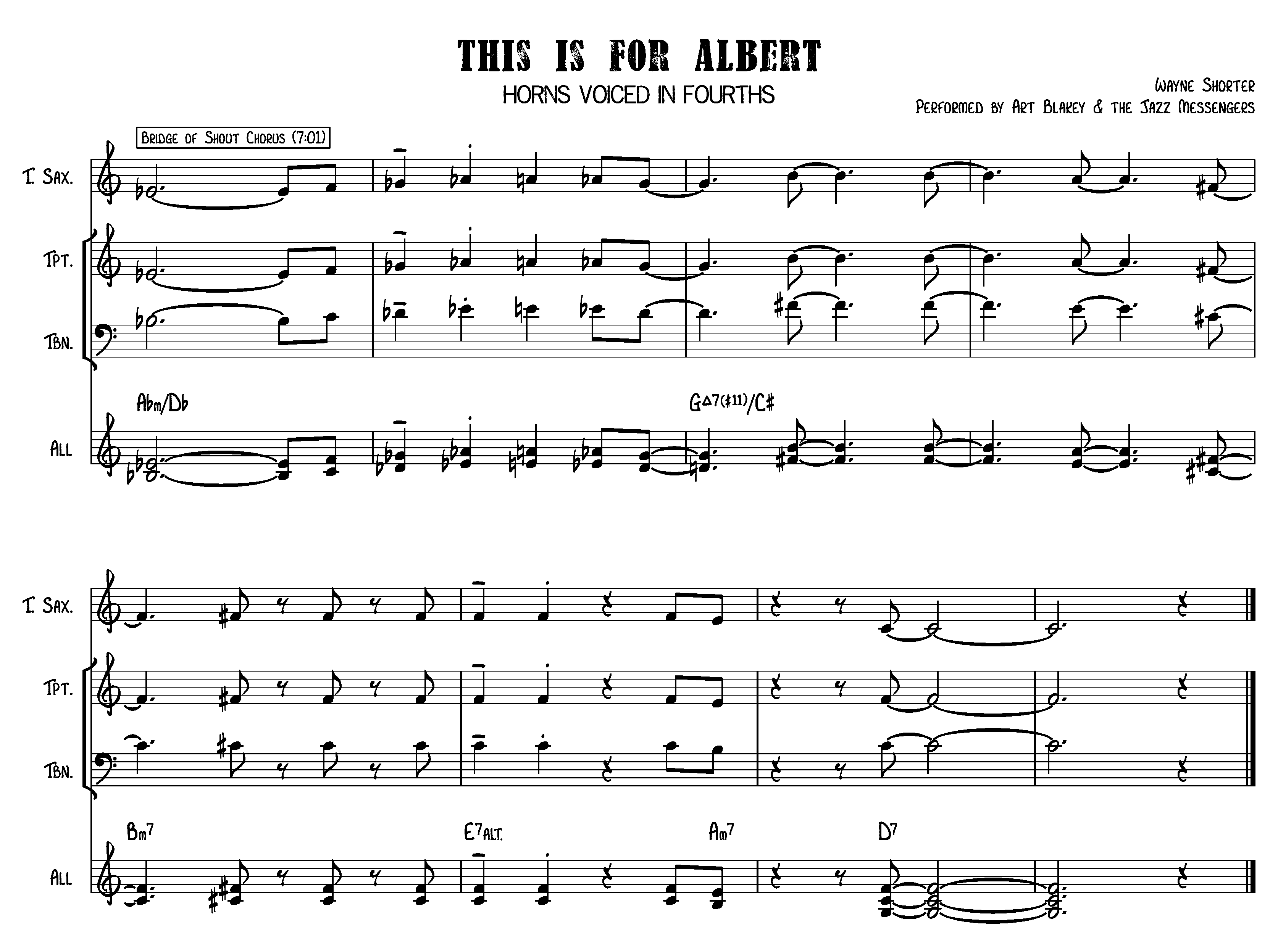 In Kamasi Washington’s “Final Thought”, the A section of the head is harmonized in fourths.

Horns are voiced close together (within an octave) to form triads, often using the upper extensions of a chord (like 13-#11-9). Major and minor triads are most common, and are usually inverted to create parallel 3rds and 6ths instead of parallel 5ths. Other types of triads, sus chords, and non-triadic close groupings are used sometimes for interest or to fit the melody. 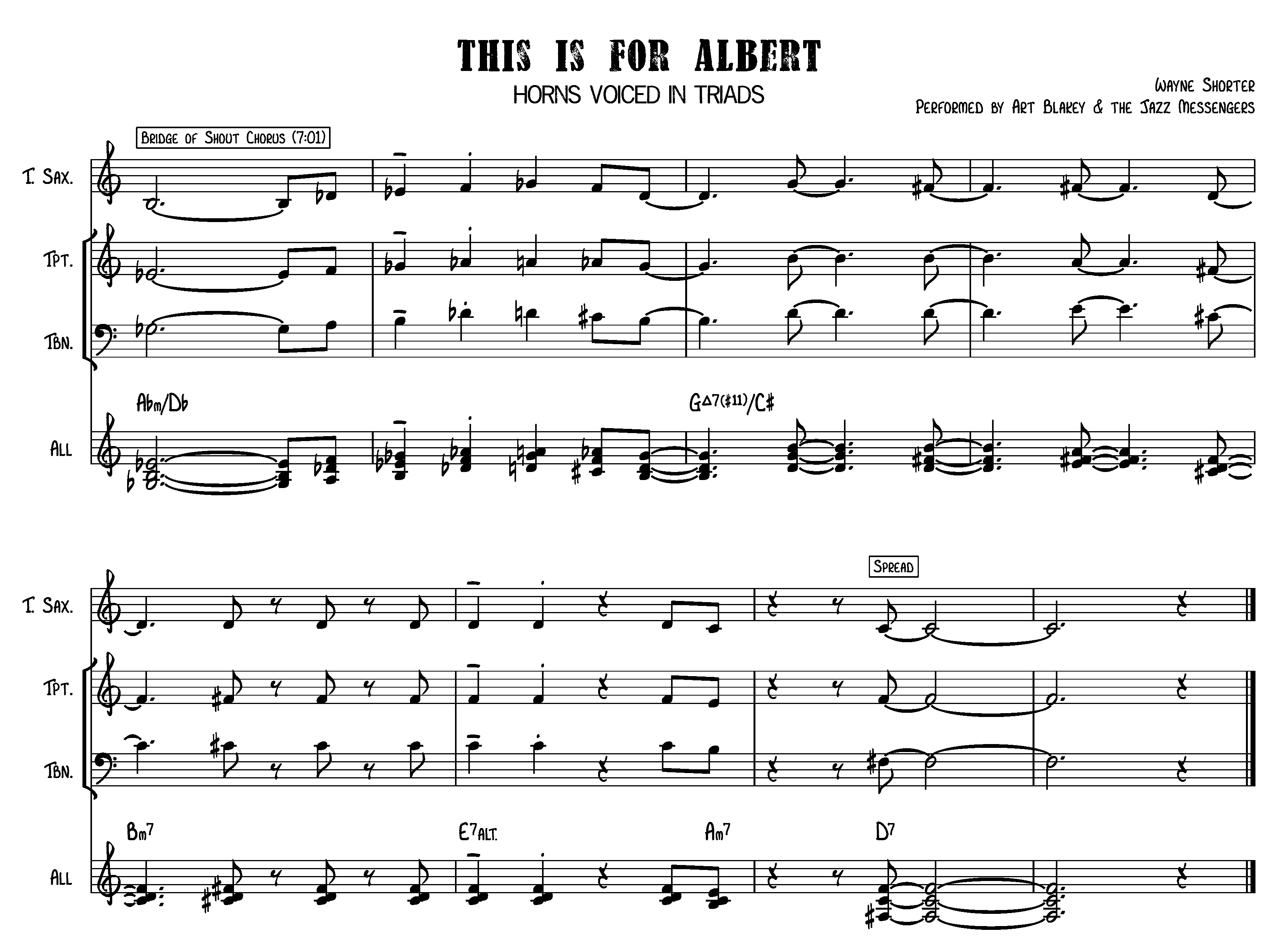 This is actually the way the horns are voiced on the record. Note that the last chord is a spread voicing rather than a triad voicing.

Art Blakey & the Jazz Messengers’ “Free for All” uses a lot of triadic voicing on the head.

Horns are voiced further apart with interval of a seventh or more. Pianistic shell voicings such as R-3-7 are often used. This type of voicing tends to work best on slower tunes with long, sustained notes. 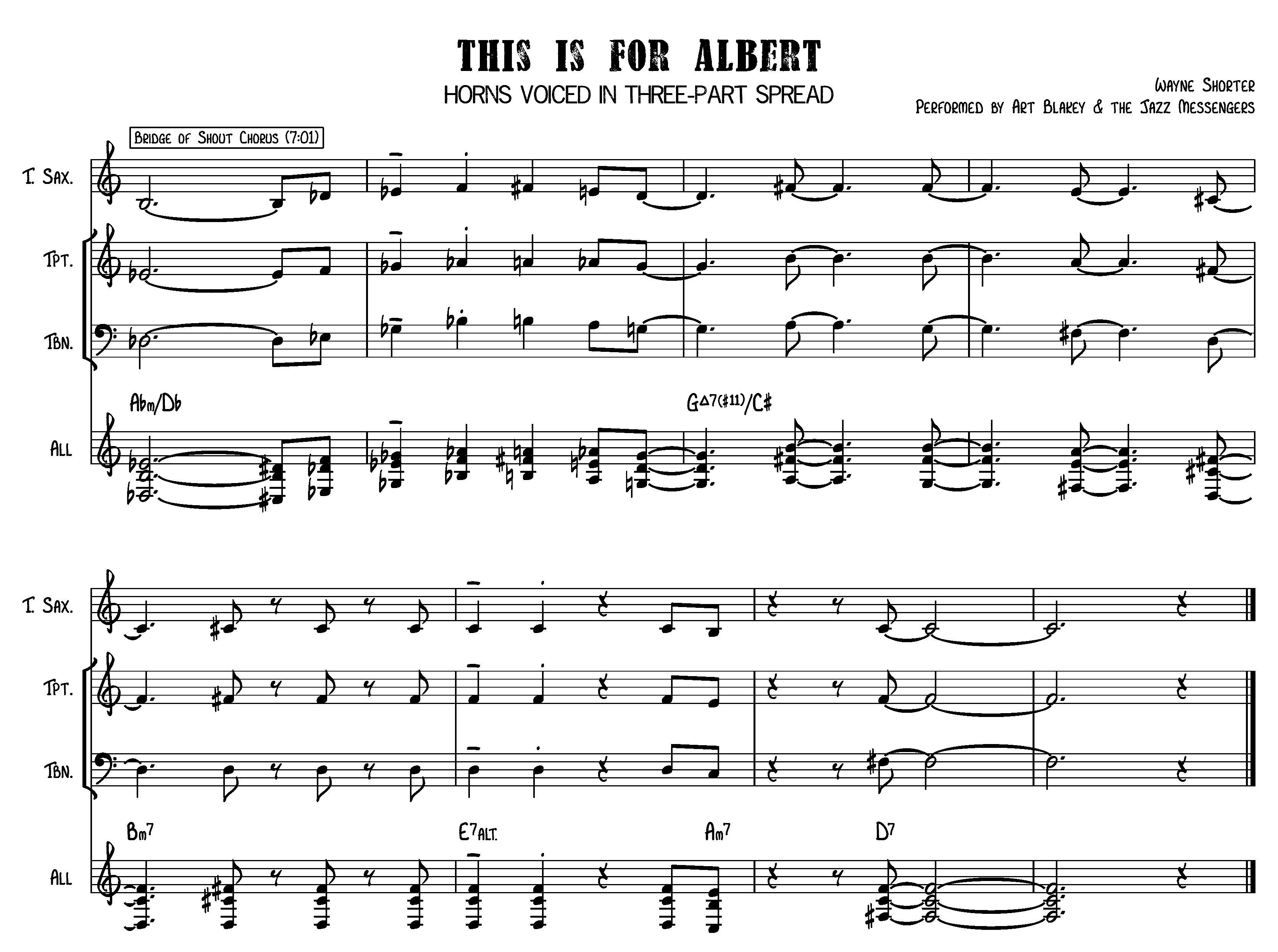 This Is For Albert and Free for All by Art Blakey & The Jazz Messengers both use occasional spread voicings at dramatic moments.

All horns move in parallel motion, maintaining the same intervals for every chord. This can become very dissonant as the voicing of the horns does not change to fit the underlying harmony. Works well on modal tunes and over pedal tones. 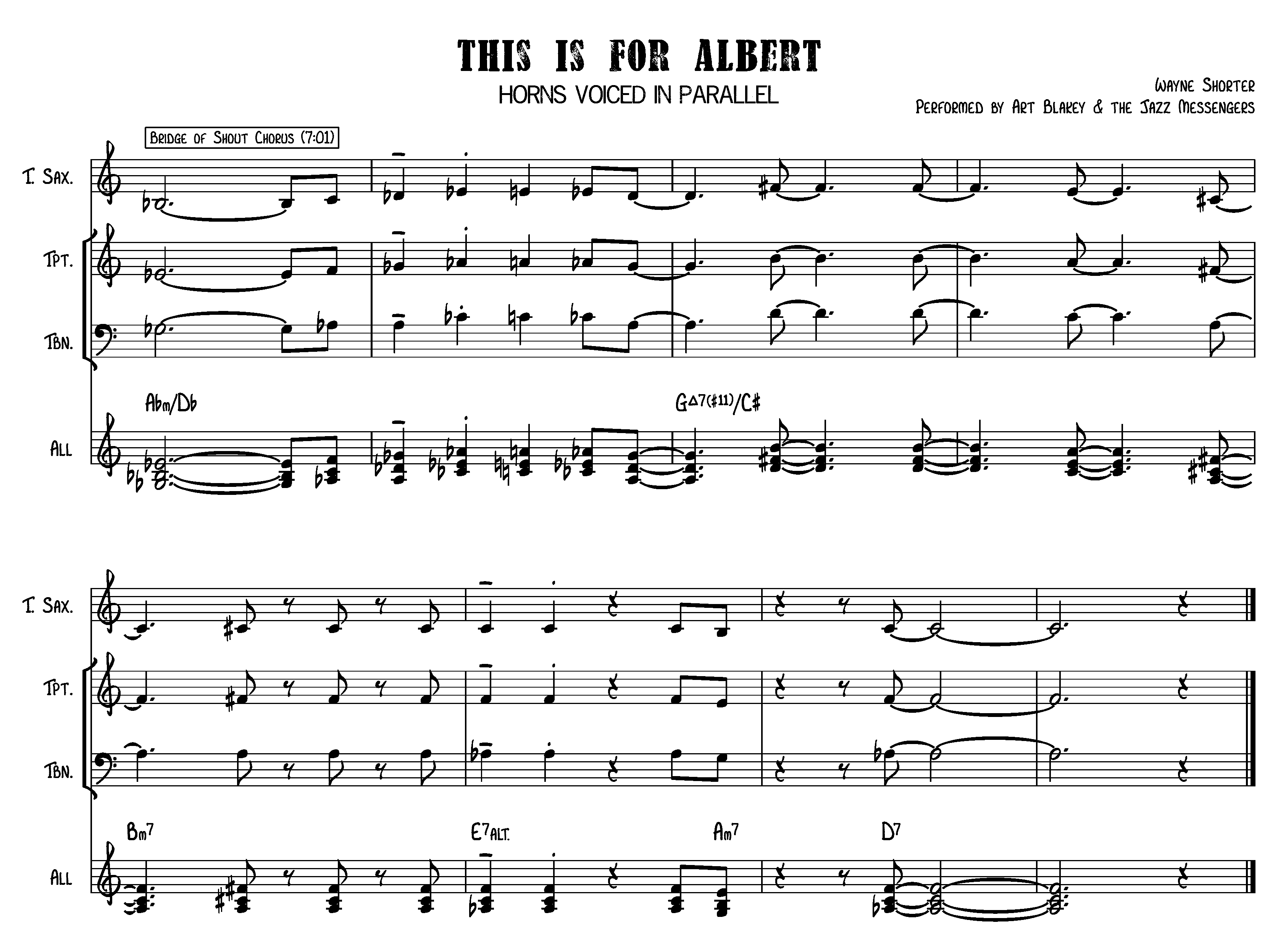 This example has the tenor sax and trombone playing at intervals of a perfect 4th and major 6th below the trumpet.

Horace Silver’s Nutville and Art Blakey’s Caravan both use this approach on the A sections of their heads.